“Police work is not all glamour and excitement and glory. There are days and days of routine, of tedious probing, of tireless searching.”

Rarely have a director and cinematographer worked as succinctly as Anthony Mann and John Alton. During the late 1940s, they collaborated on a series of films noir that rank among the finest of their kind: T-Men (1947), Raw Deal (1948), Reign of Terror (1949), and Border Incident (1949). Key among these films, though perhaps less celebrated due to the uncertainty of Mann’s involvement, is 1948’s He Walked by Night.

Details surrounding the film get increasingly hazier with time, but here’s what we know for sure: Mann replaced original director Alfred L. Werker at some point during production, and shot a number uncredited scenes. Exactly which of the 79 minutes belong to Mann and which belong to Werker is another matter altogether. Some have claimed that Mann essentially remade the entire film, others claim he added the finishing touches at most. The most detailed estimation comes from Max Alvarez’s excellent book The Crime Films of Anthony Mann, which states that he shot all of the nighttime exteriors, or a total of one third of the film; including the iconic finale. 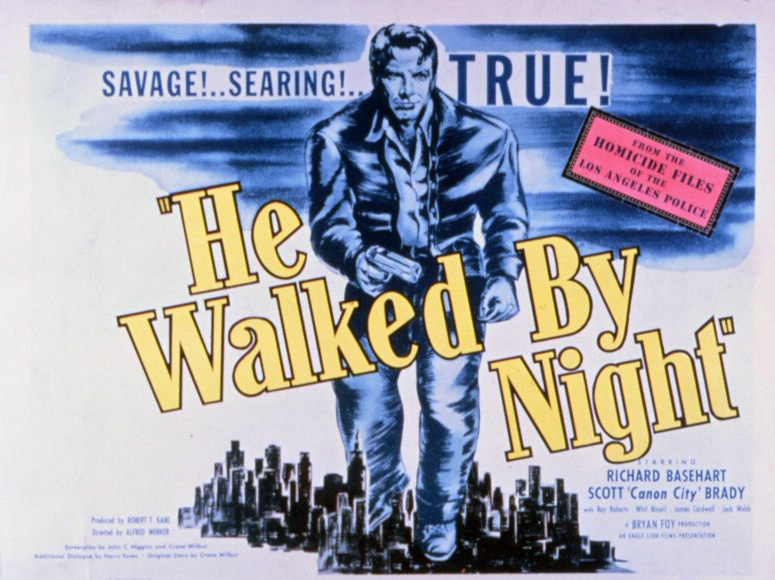 One third. That’s all. What Mann and Alton manage to do with this one third supersedes what most other filmmakers were doing with feature-length runtimes. More than the grim, unsettling T-Men or even the brilliantly baroque Raw Deal, He Walked by Night shows the duo at the height of their visual prowess, revolutionizing the film noir as they went along.

The film opens on an appropriately grim note. We spot the titular He, Roy Martin (Richard Basehart), prowling the empty streets of Los Angeles. A background street lamp casts his figure in long shadows against the pavement. Theft, it appears, is on the agenda tonight, until Martin’s handiwork is interrupted by a patrol cop on his way home. The cop asks to see some form of identification, and Martin responds with three slugs from a revolver. The cop attempts to cut Martin off in his fleeting moments, but the elusive figure scampers away, back into the night. 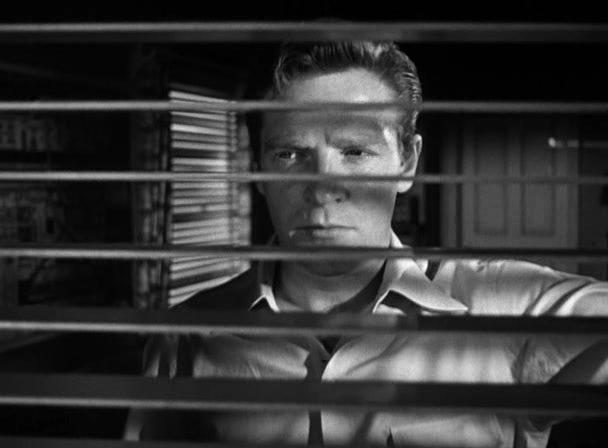 Each of Mann’s sequences builds upon this opening note like a foreboding theme. Martin is constantly shown in fearful isolation, pacing his Hollywood bungalow, scanning police frequencies on his custom radio. The director keeps dialogue to a minimum, and instead relies on auditory and visual tactics to heighten tension. It works brilliantly. Stranded in silence, Martin jumps at every unfamiliar sound or suspicious growl from his dog. He shuts off the lights in order to see out the window, to the extent that we only catch glimpses of him through the blinds. As Martin’s chances dwindle, so too does our visual representation of him.

As Martin, Basehart offers the finest of his many film noir performances. Though bearing little resemblance to Erwin Walker, the real-life inspiration for the character, the usually charming actor frightens through his tightly-wound stoicism. He acts as though his affable facade could crumble at any moment, and subsequently delivers each line as if he were a coiled cobra, waiting– wanting– to strike. That we never know the motivation for his actions makes the character all the more threatening. In fact, the only time we catch a glimpse of humanity is when he’s forced to remove a bullet from his stomach after narrowly escaping the police. Framed in invasive close-up, it is a tour de force of suggestion, with Basehart’s short breaths and anxious expression erasing the need for any graphic detail.

Martin’s intensity is paralleled by the determination of the cops pursuing him. Chuck Jones (James Cardwell) and Marty Brennan (Scott Brady) are their names, and straight-laced justice is their game. These are not complicated men — we were still a few years away from seeing truly complex policemen in film noir — they are boy scouts, wooden as a baseball bat and seemingly just as patriotic. Their investigation makes for some of the film’s slower moments (Cardwell is forgettable, Brady lacks the gravitas of his brother Lawrence Tierney), but there is some fun to be had when Jack Webb shows up as a scene-stealing lab technician. Dragnet fans will get a kick out of his spunky performance.

The struggle between Martin and the police eventually culminates, in grandiose fashion, within the Los Angeles sewer system. It’s here, with eight minutes to go, that He Walked by Night all but overloads the ocular senses with its visuals. Chiaroscuro lighting is wielded with such precision that any subsequent use of it might seem underwhelming by comparison. The moist sewer floors (which were shot on location) allow for reflective glints of light to spike the camera at random, while the shot of Martin waving a flashlight in the darkness ranks among the most iconic and stylistically rich expressions of film noir ever put on display. I get chills just writing about it. 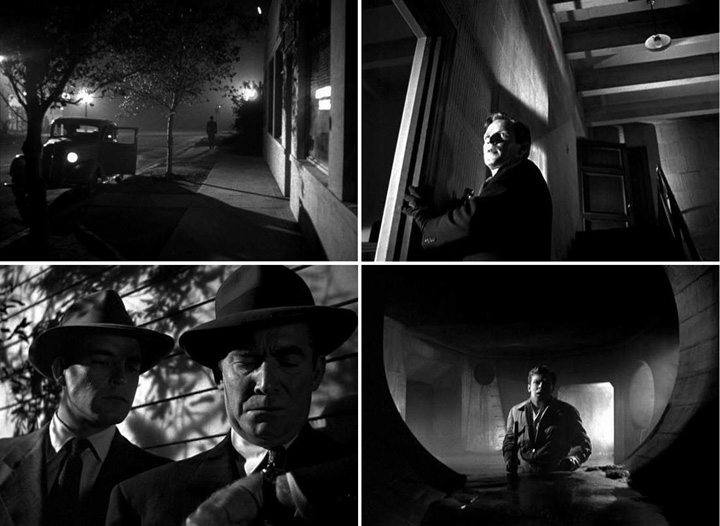 Let us now praise John Alton, who if it not for his painterly eye, many of these scenes would not be possible. Mann had an undeniable gift for camera dynamics and the staging of action, but Alton was the missing variable, the one who made his director’s feverish chases glisten in the moonlight. Alton’s cinematography method, which he described as “Painting with Light”, was never as daring as it is here. Characters are profiled to within an inch of visibility at times, pushing the very boundaries of the era’s technology. Furthermore, the frame is completely blacked out in an earlier murder scene, save for a few crucial details in the center that draw us in. Alton and Mann aren’t using imagery to aid the story, they are using imagery to tell the story.

While my praise could go on and on, I won’t pretend that He Walked by Night is without flaws. The police scenes are a bit wooden, and the police narration is a common shortcoming of the semi-documentary film noir. But Mann and Alton (and, to an extent, Werker) manage to supersede these flaws through sheer visual artistry– and that, dear readers, is a virtue that has only gotten better with time. B

TRIVIA: During production, Jack Webb was introduced to police advisor Marty Wynn, and the two thought up the idea for what would later become Dragnet.