For Week Two of this very special month-long promotion (courtesy of Janson Media) CMH is giving away FIVE copies of the Hollywood Collection DVD: Gregory Peck His Own Man!

All you have to do is be one of the 1st five fans to rate 12 posts on CMH’s BlogHub. Simple as that! CMH has 14 BlogHub Member Blogs now — and I’m hoping that, as you browse and rate posts from these really terrific Classic Movie Bloggers, you’ll discover some new and exciting blogs to follow! 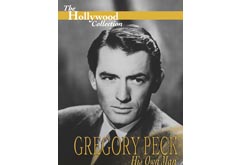 And if you don’t win this week, you can enter again next week to win yet another Hollywood Collection DVD (Grace Kelly, The American Princess). And there will be even more prizes to follow!

About the Gregory Peck His Own Man DVD:
One of Hollywood’s most enduring and popular stars draws on his memories to tell the amusing and touching story of how it was when the studios ruled supreme, and how a shy and inarticulate boy from a broken family could rise to super stardom to become one of the most handsome, attractive and respected of movie leading men. This entertainment special includes clips from Peck’s most important movies including The Yearling, To Kill a Mockingbird, Spellbound, Moby Dick, Roman Holiday, Duel in the Sun, The Guns of Navarone, MacArthur, Captain Hornblower, The Boys From Brazil – and features interviews with Jane Fonda, Audrey Hepburn, Liza Minnelli, Anthony Quinn, Jack Lemmon, Lauren Bacall, directors Robert Mulligan and J. Lee Thompson, and Peck’s son Stephen. LENGTH: 54 Minutes – Total Content: 90 Minutes