Don Knotts played Barney Fife, the bumbling deputy on The Andy Griffith Show, so well and so memorably that the part would come to define the man.

Don, who would have turned 92 today, July 21, spent the rest of his career trying to escape Barney’s long, slender shadow. And he very nearly succeeded. Today, Don is probably as well-known for his film work as he ever was for his tenure in television’s Mayberry. In autumnal appearances at conventions and book-signings, Don’s theatrical identity varied from fan to fan. Many remembered him as Barney Fife, but others knew him mostly through his work with Tim Conway in Disney’s Apple Dumpling films, while others would cry out “Attaboy, Luther,” in homage to his character in The Ghost and Mr. Chicken.

By my count, Don starred in nine films, from the partially animated fantasy The Incredible Mr. Limpet in 1964 through the 1980 Sherlock Holmes spoof The Private Eyes, the last Conway-Knotts feature. Counting them is tricky; for example, my list of nine does not include The Apple Dumpling Gang, in which Don was not credited as a lead actor, but it does include The Apple Dumpling Gang Rides Again, in which he was.

Don played supporting roles in many other films – – and such is Don’s star power that his face now appears front and center on the DVD covers for all or most of those films. To prove my point, I need only remind you that neither Conway nor Knotts was the star of The Apple Dumpling Gang: They are listed third and fourth in the credits, after Bill Bixby and Susan Clark.

Very few actors have the star power to carry even one film, let alone nine. But Don proved, early on, that his films could make money – – even those films in which he played a minor role, such as Gus, an absurd Disney feature about a football-playing mule. Don doesn’t do much in Gus, but it’s his face (and the mule’s) that adorns the DVD cover, and the film is marketed now as part of Walt Disney’s “Don Knotts Collection.” 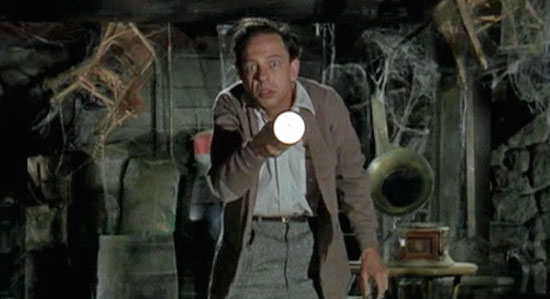 Don’s movies were low-budget fare, sometimes released in tandem with other, truly schlocky features, generally to little fanfare. Yet, they always seemed to make money. And while none of them is a classic along the lines of Bringing Up Baby or even The Bad News Bears, most of Don’s films enjoy a fairly strong reputation today among film buffs. Don never starred in a bad film.

Several of Don’s films debuted in the lazy months of summer. Today, to celebrate his birthday, we remember three of them.

This film was Don’s fourth as leading man and third under a five-film contract to Universal, which had established a successful formula with two previous entries, Mr. Chicken and The Reluctant Astronaut.  Shakiest Gun was a loose and ultimately successful remake of Paleface, a Bob Hope hit from 20 years earlier.

Don loved shooting a cowboy movie. He brought his children to the Shakiest Gun set to play extras.

Don Knotts, The Shakiest Gun in the West

At 42, Don found himself acting opposite Barbara Rhoades, a tall, voluptuous redhead two decades his junior. Slackening Hollywood mores permitted the writers to script a memorable seduction scene. Barbara slinks into Don’s chamber and coos, “I’m sorry to bother you like this, but I have a terrible toothache,” as Don’s gaze drifts down toward her cleavage. He finally stammers, “Is it in your mouth?”

Don’s fourth Universal film, The Love God, strayed even farther from the G-rated Americana of The Andy Griffith Show. The story is a farcical commentary on the hypocrisy of the American sexual revolution. Don portrays the provocatively name Abner Peacock, publisher of  a bird magazine. A Larry Flynt-styled pornographer manages to dupe poor Abner into retooling Peacock as smut.

In perhaps the film’s finest scene, the curvaceous new editor of Peacock, played by screen beauty Ann Francis, tortures Abner by beseeching him to stay on as publisher while she rocks back and forth on a swivel-back chair in a hip-length mini-dress, as Abner rolls his eyes desperately skyward. One wonders whether this scene inspired another, immortalized by actress Sharon Stone two decades later in the film Basic Instinct. 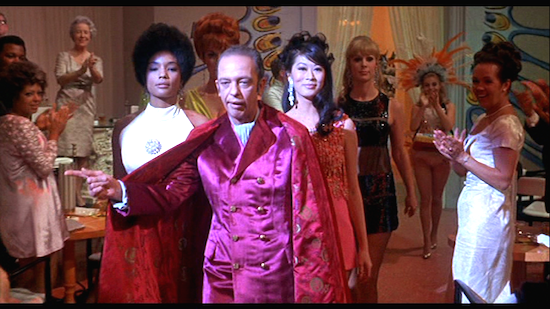 The Love God pays only faint homage to Don’s Griffith Show past. As the camera pans across Abner’s hometown near the start of the film, the choir at Peacock City Community Church sings “Juanita,” the song Barney Fife had warbled over the telephone line to his unseen waitress paramour in more innocent times. 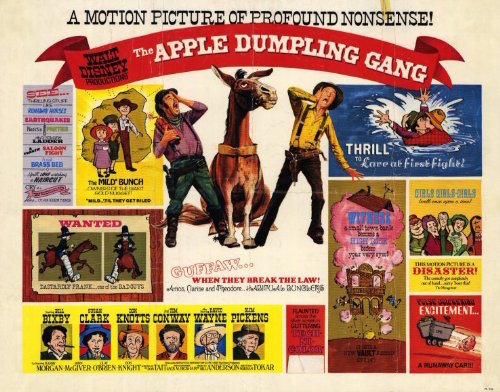 By this time in his career, Don had every reason to believe his film career was over. He hadn’t headlined in three years, and the family comedy genre that had spawned The Shakiest Gun seemed to have played out. Then came a call from Disney, a studio that was almost singlehandedly sustaining the family genre.

It’s easy to forget now that Don Knotts and Tim Conway are secondary characters in The Apple Dumpling Gang, a story that revolves around a trio of orphaned children taken in by a reluctant gambler in the Old West. Happily, much of the comedy rests on Conway and Knotts as the bumbling robbers who attempt to relieve the urchins of a gold nugget before conscience intervenes. 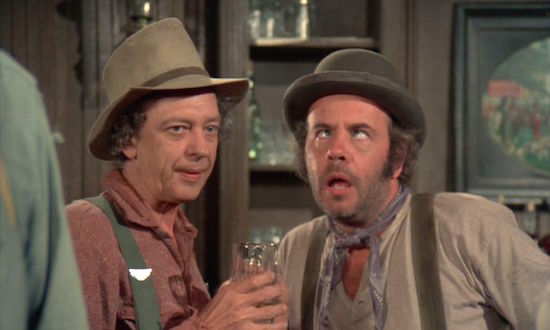 Don Knotts and Tim Conway in The Apple Dumpling Gang

Don hadn’t had a real partner since he left The Andy Griffith Show, nearly 10 years earlier. Conway, the resident maniac on television’s The Carol Burnett Show, was a far cry from Andy Griffith. Don was nearly a decade older than Tim and, at 50, just a notch slower on the draw than in his Barney Fife heyday. Now, for the first time, Don would be working with a comedian more highly caffeinated than himself.

Don and Tim ad-libbed much of their way through Apple Dumpling and three subsequent films, often with Tim leading the way. Here is a typical exchange:

The film’s comedic highpoint is an agonizing scene depicting Amos and Theodore laboring to remove a ladder from a firehouse without waking the fireman or his dog. The two actors improvised a clumsy ballet of silent-comedy tension.

Daniel de Visé is Don Knotts’ brother-in-law and author of Andy and Don, a lively and revealing biography, and the definitive work on the legacy of The Andy Griffith Show and two of America’s most enduring stars. The book features extensive unpublished interviews with those closest to both men and a wealth of new information about what really went on behind the scenes. Click below to purchase Andy and Don on Amazon.

This entry was posted in Posts by Daniel de Vise, TV Roles and tagged Andy and Don: The Making of a Friendship and a Classic American TV Show, author daniel de vise, Don Knotts, Tim Conway. Bookmark the permalink.