A twist on the Charles Dickens classic Oliver Twist (see what I did there), Oliver! is an exciting tale about an orphan who runs away from an orphanage and gets caught up in a gang of child thieves. The twist? (I can’t seem to help myself!) They sing and dance their way happily through their sordid, miserable little lives! I actually have a personal experience with one of the songs from the film. For one of my assignments in a class, my group had to create a pitch for a restaurant idea, and we found this wonderful YouTube video featuring the song Food, Glorious Food. Unfortunately, I can’t find the clip, but it was a perfect fit. When I watched the film and heard the familiar music start playing, I sat up with a smile on my face for two reasons: A) I found the source of the YouTube song; and B) I knew that this would be an enjoyable movie — which it was, although there were some pretty sad moments throughout the film, especially towards the end. There were two characters that really stood out over the rest: Fagin (Ron Moody) and the Artful Dodger (Jack Wild). Fagin can be considered a foster father for a bunch of the young, abandoned boys. He cares for the children and teaches them to make a living by doing what he does best: pickpocketing. And the Artful Dodger is his #1 go-to-guy. Both of the actors were nominated for Oscars, but neither one came out as the winner. I also would like to point out that Oliver Reed, who played Bill Sikes, is terrifying, and that’s all I have to say about that. Since the development of the MPAA rating system, Oliver! is the only G-rated film to receive the Academy Award for Best Picture, which is ironic since the following year Midnight Cowboy became the only X-Rated film to win Best Picture. Onna White also received an Honorary Award for her outstanding choreography achievement for Oliver!.

Fagin: [sings] I’m reviewing the situation / Can a fellow be a villain all his life? / All the trials and tribulations. / Better settle down and get myself a wife! / And a wife would cook and sew for me, / And come for me, and go for me, / And go for me, and nag at me, / The fingers, she would wag at me. / The money she would take from me. / A misery, she’ll make from me… I think I’d better think it out again! 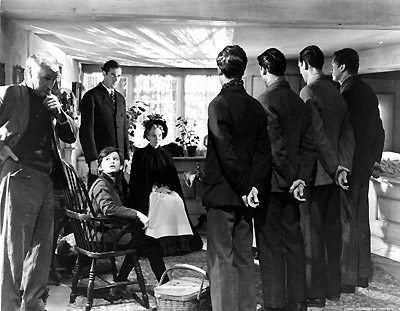 I’ve been waiting to write about this film, I really have. I’ll start off by saying this: How Green Was My Valley is, by no means, a bad film. John Ford is a fantastic director who, before winning Best Director for this film, already won two Best Director awards, and would wind up winning one more throughout his life. Daryl F. Zanuck was one of the most prolific producers in Hollywood and would be nominated for 15 Oscars, winning three, with his first being for How Green Was My Valley. The reason I’m saying all of this is because I honestly cannot hide how I feel about How Green Was My Valley beating both Citizen Kane and The Maltese Falcon for Best Picture. Citizen Kane is considered by many to be the best film of all time, while The Maltese Falcon is considered to be the best film noir of all time. No matter which way I look at it, as a fan in general or as a Cinema Studies major, it doesn’t make sense to me. Alright, I got that off my chest. How Green Was My Valley is a great piece of work, which is expected with John Ford in the director’s chair. The film is uplifting, powerful, and, at times, can tend to be rather sad (especially at the end) and I can see why it would be chosen to win Best Picture — in any other year.

Huw Morgan: [narrating] Men like my father cannot die. They are with me still, real in memory as they were in flesh, loving and beloved forever. How green was my valley then.