Posted on October 20, 2015 by Sara and Cynthia Brideson

In common folklore and throughout history, witches and animals have been inextricably linked. Particularly ubiquitous are the images of a cackling hag stirring a brew with a black cat at her feet or a raven crowing at her window. For this reason, women who keep numerous pets, cats in particular, have assumed the stereotype of being eccentric or in some way witch like. One woman changed this stereotype. She made being a patroness to animals glamorous instead of pagan. Her name was Billie Burke, but most know her as Glinda the Good Witch in the timeless musical The Wizard of Oz (1939). From the moment Billie floats onto screen, audiences agree with the bewildered Dorothy when she begs Glinda’s pardon for assuming all witches “are old and ugly.” 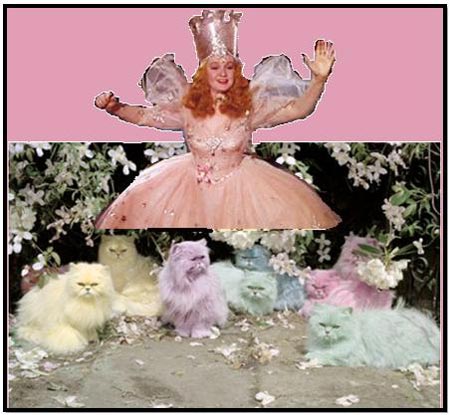 Glinda working her magic with some colorful cats!

Billie Burke was remarkably like her celestial counterpart in Oz. Glinda provided a benign, loving dominion over small, defenseless creatures: the Munchkins. In her personal life, Billie Burke provided a benign, loving dominion over defenseless creatures big and small, with cats being her favored creature. A celebrated beauty on Broadway before she entered film, Billie was unafraid to fall into the archetype of “old maid with cat” after her husband, the flamboyant producer Florenz Ziegfeld, died. Both in her youth and in her senior years, Billie Burke made all animals, but particularly cats, an integral part of her life and character. 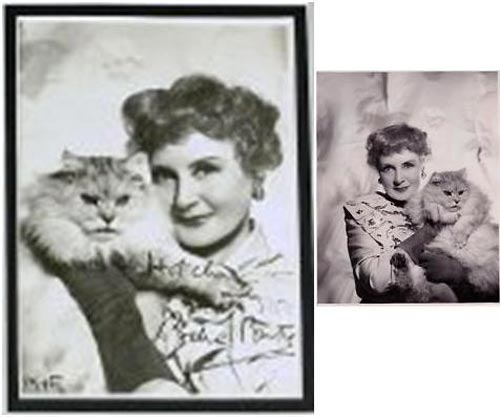 Billie circa 1948 with a cat named Hot Cha

Billie’s love of animals flourished at her lavish estate, Burkeley Crest, in Hastings-upon-Hudson in upstate New York. The menagerie came to consist of “out-of-work actors or circus performers” Ziegfeld claimed looked sad when unemployed. For a time Billie had two lion cubs. She loved and bottle fed them “until they became dangerous nuisances and departed for the zoo.” But the largest group of critters to roam the estate were cats, which numbered near thirty. The Ziegfelds kept a plot of land reserved for a pet cemetery, and whenever an animal passed away, Ziegfeld, Billie, and Patricia would mourn it as if it was a human; indeed, Patricia remembered: “To us they were nearly human.” 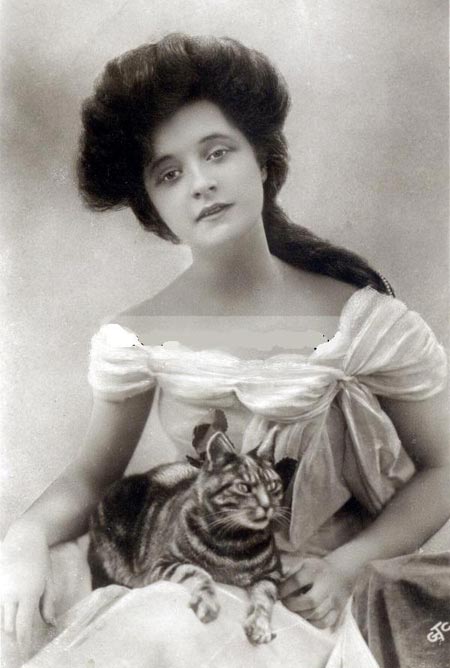 The oases Burkeley Crest and Billie Burke Island provided for the Ziegfelds and their animals were lost all too quickly with the Crash of 1929. Ziegfeld died bankrupt in 1932, leaving Billie to pay his debts and make a new life for herself. She went to Hollywood and became one of film land’s most beloved comedic character actresses. Her first years in Hollywood were difficult, but a “tiny gray and white kitten, of no pedigree at all” was her “constant companion” and provided much comfort. Now an independent woman, Billie explored spirituality and new lifestyles. Though raised on a heavily meat dependant diet, Billie became a vegetarian in the late 1940s and actively engaged with the Humane Society. In the late 1950s, her healthy lifestyle kept her looking twenty years younger than her actual age. She kept ever more youthful by penning her memoirs. In these volumes, she gave candid insights into her health habits—and her love of cats. She told her collaborator, Cameron Shippe, “I want to do a chapter about cats, several chapters.”

Unfortunately, this desire was never realized in her book, but her love of felines was no secret. Her small Hollywood bungalow was home to four cats: three elderly ones named Bibby, Bandy, and Sunny Jim and one youngster named Tommy. The amber colored tabby, Tommy, was a cat she had saved from death. During the run of a play in which she and Tommy costarred, Listen to the Mockingbird, she had fallen in love with the handsome cat. At curtain call, she carried him on stage and waved his paw to the audience. When the show closed, the producers planned to humanely dispose of the now unemployed kitty. Billie was horrified and snatched Tommy from the producers and took him home with her on the plane back to California. He became quite at home with Billie and could most often be found sleeping beside Billie on her bed, mildly tolerated by the three elder cats. Billie, like Glinda the Good Witch aided Dorothy in her journey home, helped many a feline find its way to a forever home. 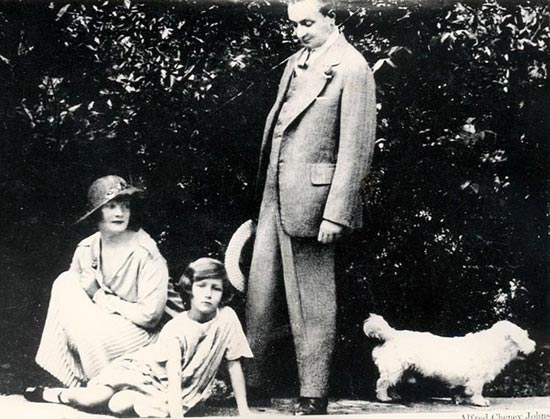 Billie, her daughter Patricia, and her husband Florenz Ziegfeld at their home with one of their many pet dogs.

After years of wearing the various titles as the toast of Broadway, Mrs. Ziegfeld, and a character actress, Billie Burke could have become a self-satisfied woman complacent with her success and insulated in the rarefied, at times cold, world of fame. Instead, she used her success to become a female St. Francis who acted as patroness to homeless creatures, giving them lives as luxurious as any star’s. As a young woman Billie could claim Mark Twain, Enrico Caruso, and a British duke among her admirers. Yet, even with such diverting luminaries at her feet, Billie was once quoted as unflinchingly declaring:  “Like Lionel Barrymore [her colleague and one time co-star], I prefer the company of cats.”

This entry was posted in Posts by Sara and Cynthia Brideson and tagged billie burke, cats, Ziefeld. Bookmark the permalink.