On Blu-ray: Margaret Sullavan and Jimmy Stewart in The Mortal Storm (1940)


The Mortal Storm (1940) presents a personal view of how the Nazi regime first began to devastate the world. It finds the poison at the root of its rise and demonstrates how quickly it spread. While it is a difficult film to watch, the charm of its stars and director Frank Borzage’s pow read more 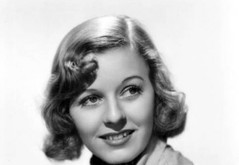 Margaret Sullavan made sixteen movies during her Hollywood career


Margaret Brooke Sullavan (May 16, 1909 – January 1, 1960) was an American stage and film actress who preferred working on the stage, making only sixteen movies during her Hollywood career.   Margaret Sullavan was born May 16, 1909 in Norfolk, Virginia to Cornelius Sullavan, a wealthy stockbrok read more

Classic Movie Hub Blog Posted by Annmarie Gatti on May 16, 2014


One of Hollywood's most beloved on screen couples has to be Margaret Sullavan and James Stewart. The pair made four films together: Next Time We Love (1936); The Shopworn Angel (1938); The Shop Around The Corner (1940); and The Mortal Storm (1940). I have seen the last two films and like them very read more

The Shop Around The Corner – Margaret Sullavan and James Stewart


Klara Novak: [In her letter to Alfred] :  ”Oh, my Dear Friend, my heart was trembling as I walked into the post office, and there you were, lying in Box 237. I took you out of your envelope and read you, read you right there.”- from The Shop Around The Corner. I read somewhere once read more


Margaret Sullavan never cared much for Hollywood. She was more prolific on the Broadway stage, where she originated the lead roles in Sabrina and Stage Door. Even her marriages to Hollywood players: actor Henry Fonda, director William Wyler and agent Leland Hayward, didn’t last (her fourth mar read more