“Have you ever done this before?” – Robert Mitchum as Norman Clyde “No. I’ve never stolen anything in my life.” – Laraine Day as Nancy We’re met by a wedding with all the trimmings. It’s a well-to-do affair and Larraine Day looks quite dazzling. read more

Day Ten of Noirvember: Laraine Day and The Locket

Shadows and Satin Posted by shadowsandsatin on Nov 11, 2018


The Locket (1946) is a fascinating film noir that tells the story of Nancy, a beautiful and accomplished young woman who, at the start of the picture, is about to marry the love of her life, John Willis. Shortly before the start of the ceremony, however, John is visited by Dr. Harry Blair, who claim read more 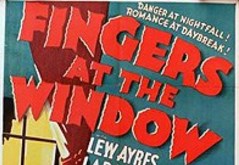 Fingers at the Window (1942) with Lew Ayres and Laraine Day


Share This! DANGER AT NIGHTFALL! Quirky little films are usually rather amusing.  Such is the case with 1942’s Fingers at the Window, a would-be suspense film starring Lew Ayres in the lead role as out of work actor Oliver Duffy.  His leading lady here is Laraine Day as Edwina Brown.  Sadly, the read more


She was a perfect mix of sophistication and fresh-faced beauty. Laraine Day was an All-American girl next door, who played Nurse Mary Lamont in the “Doctor Kildare” film series while under contract to Metro-Goldwyn-Mayer. Day co-starred with top Hollywood stars such as John Wayne, Cary Grant, Lana read more 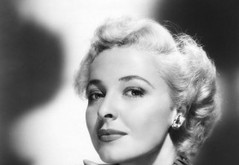 
Laraine Day (October 13, 1920 – November 10, 2007)   Laraine Day was born La Raine Johnson on October 13, 1920 in Roosevelt, Utah, to an affluent Mormon family. She later moved to California where she was a 1938 graduate of Polytechnic High School in Long Beach, California and began read more


Laraine Day, a popular actress who performed in almost two dozen MGM movies during Hollywood’s Golden Age. One of my favorite moves that she did was, A Bride by Mistake(1944). Director: Richard Wallace. Cast: Laraine Day, Marsha Hunt, Phil Vernon and Edgar Buchanan. At the La Playa Hotel read more