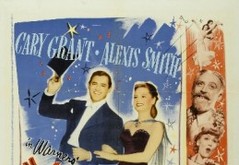 
“Night and Day” is a 1946 Technicolor Warner Bros. biographical film about American composer and songwriter Cole Porter. The movie was directed by Michael Curtiz and produced by Arthur Schwartz, with Jack L. Warner as executive producer. The screenplay was written by Charles Hoffman, read more


Alexis Smith (June 8, 1921 – June 9, 1993) was a stage, film, and television actress. She performed in Hollywood movies in the 1940s and had a notable career on Broadway in the 1970s, winning a Tony Award in 1972. Fun Facts: Tall, graceful, talented, Canadian-born actress who was married read more