Alastair MacLean's The Guns of Navarone


A long movie that doesn't seem long is a carefully-crafted motion picture. Such is the case with The Guns of Navarone (1961), which clocks in at a brisk 158 minutes. Based on Alastair MacLean's 1957 novel, it tells the story of a small military team tasked with destroying two huge German gun read more


The Guns of Navarone   Directed by J. Lee Thompson Written by Carl Foreman from a novel by Alastair MacLean 1961/USA Columbia Pictures Corp/Highroad Productions Repeat viewing/Netflix rental This is a solid war movie with a fantastic cast and lots of explosions. Mallory (Gregory Peck) is a multi- read more 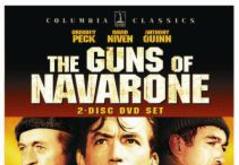 The Guns of Navarone

The Best Picture Project Posted by Alyson on Mar 12, 2010


Action and adventure await six men on a dangerous mission to destroy the two powerful guns on German occupied Navarone.  These guns control the fate of the seas and nearby Greek islands, including one full of trapped British troops.  No one can get to or leave the island, not even by plane and more read more