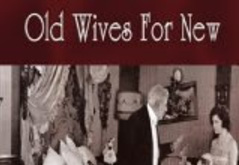 Noir and Chick Flicks Posted by Silentfilmfanatic on May 11, 2010


"Old Wives for New" (1918) is a silent drama starring Elliott Dexter, Florence Vidor, and Sylvia Ashton. Directed by Cecil B. DeMille and based on the novel by David Graham Phillips, this film is about a millionaire who has settled reluctantly into an unhappy marriage. Charles Murdock, played by El read more