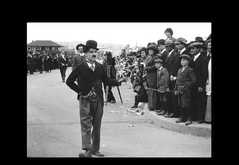 
The first film appearance of Charlie Chaplin’s famous character, The Tramp. Note that this was not the first time Chaplin donned the costume – that occurred for the filming of Mabel’s Strange Predicament. However, Kid Auto Races at Venice (directed by Henry Lehrman) was released on read more


Okay, Kid Auto Races at Venice makes a little more sense now… it was ad-libbed. Charlie Chaplin really was just doing annoying gags in front of people who are watching a baby-cart race. Most the film consists of Chaplin acting like a jerk. He’s funny and appealing enough, but the short& read more