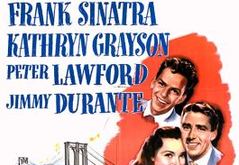 Musical Monday: It Happened in Brooklyn (1947)


It’s no secret that the Hollywood Comet loves musicals. In 2010, I revealed I had seen 400 movie musicals over the course of eight years. Now that number is over 500. To celebrate and share this musical love, here is my weekly feature about musicals. This week’s musical: It Happened in Brooklyn (19 read more

Flickers in Time Posted by Beatrice on Aug 2, 2018


Spent a relaxing day and managed to snag a new-to-me movie, Richard Whorf’s musical It Happened in Brooklyn.  Frank Sinatra thinks he will find all the confidence he lacks when he comes home from War to his beloved Brooklyn.  He does eventually but it takes the help of equally disheartened Jimmy read more