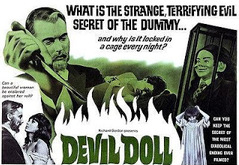 
I've seen almost every British horror film from the 1960s.....but DEVIL DOLL (1964) has until recently eluded me. The movie is not to be confused with MGM's 1936 THE DEVIL DOLL directed by Tod Browning. DEVIL DOLL is about a stage hypnotist and ventriloquist called the Great Vorelli (Bryant Haliday) read more 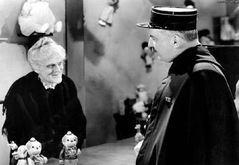 
The Devil Doll (1936). Directed by Tod Browning. Cast: A cross-dressing Lionel Barrymore and Maureen O'Sullivan. The movie was adapted from the novel Burn Witch Burn! (1936) by Abraham Merritt. Paul Lavond, wrongly convicted of robbing his own bank more than seventeen years ago, escapes from Devi read more