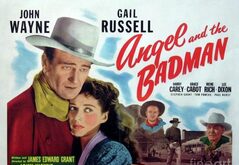 What’s Streaming in May on the CMH Channel at Best Classics Ever? Angel and the Badman, Meet John Doe and Cheating Blondes

Classic Movie Hub Blog Posted by Annmarie Gatti on May 2, 2021 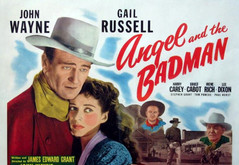 
With John Wayne partnered with his longtime collaborator James Edward Grant (Hondo, McClintock!) it’s easy to see Angel and the Badman as an early vehicle for his conservative ideals but far from being heavy-handed, it goes down as a solid B-picture with a surprisingly unique perspective on t read more

Angel and the Badman (1947) with John Wayne and Gail Russell


Share This!He lived only for revenge…She lived only for his love! By the middle of the 1940s it was becoming clear that in John Wayne Republic Pictures had a leading star on their hands.  As the 40s progressed you can see the quality of Wayne’s pictures with Republic growing almost exponential read more 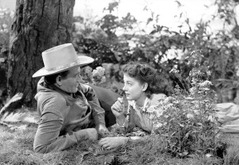 
John Wayne and Gail Russell This is my contribution to the 1947 Blogathon being organised by Shadows and Satin and Speakeasy. Please take a look at the great range of postings. A rider gallops through the Western countryside – but falls from his horse, hit by a bullet. He is seen by a pair of read more

Flickers in Time Posted by Beatrice on Mar 8, 2015 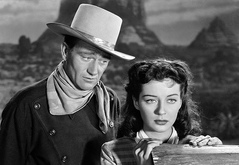 Top 100 Westerns: The Angel and the Badman


Today, we're kicking off our series on the American Western with the 1947 film The Angel and the Badman starring John Wayne and Gail Russell. The Western films made by the old Hollywood studios are some of America's greatest cultural landmarks. The cowboys and gunslingers in these films exported read more